Diary Of A Message Dad (Is Santa Claus Real?)

“Lord, take away the fiction of Santa Claus
and bring to them the real Christmas gift.”
‘The Great Shining Light‘ (57-1222)

Millions of people around the world teach their children not to talk to strangers (or accept gifts from strangers), but the majority of them seem to make one exception; Santa Claus. They teach their children of a mysterious, chubby, jolly, old man dressed in red who will magically deliver toys around the world via his flying specie of ‘Rangifer tarandus’ (aka ‘caribou’, or ‘reindeer‘).

In our society parents live in fear of pedophiles & child predators, yet somehow millions of them will stand in line this holiday season at malls around the world so their children can sit on the lap of a total stranger to get their picture taken.

One has to ask; could someone ‘of that nature‘ think of a more convenient job to apply for?

A few lyrics to the old song go:

“I’m telling you why;
Santa Claus is coming to town.“ 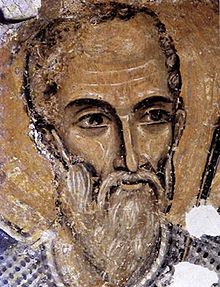 St Nicholas
from The Boyana Church in Bulgaria

Saint Nicholas was a fourth century bishop (known for giving to the poor) in what is now Turkey. He is known best as being the inspiration behind the fictitious character of Santa Claus.

So what should we tell our children about Santa Claus? As with any topic; we always want to point you to what the Message of the hour says about it:

(59-1219) Questions And Answers On The Holy Ghost (Jeffersonville, IN)
Q99. What about a Christmas play in a Holy Ghost church?
Well, if it’s about Christ, it might be all right. But if it’s about Santa Claus, I don’t believe in him. I–I done growed–I done growed away from that. I don’t believe in Santa Claus at all. See? And some of these little Christmas things they have, I think is ridiculous. And… But I think they’ve took all Christ out of Christmas and put Santa Claus in it.
And Santa Claus is a fiction story. (I’m not hurting any of your feelings, I hope, about the children.) But I’ll tell you. Here not long ago, about twenty-five, thirty years ago, when a minister here in this city, the pastor of–of a certain big church here in the city, that I knowed real well, a bosom friend of mine, he walked to me. And Charlie Bohanon (Brother Mike, you remember Charlie Bohanon, a good friend of mine.)… Set there in his office and said, “I’ll never tell my kids or have my grandchildren told that lie no more.” He said, “My own little boy walked up to me after he got about twelve years old, and talking about Santa Claus…” And he said, “Why… Honey, I’ve got something to tell you,” Said, “Mommy…” You know, and go ahead telling him what he did.
Then after he come back, said, “Then, daddy, is this Jesus the same thing?”
Tell the truth. Santa Claus is a Catholic getup about a fellow, a Kriss Kringle or Saint Nicholas, an old German Catholic saint of many years ago who went around doing good to children. And they’ve carried it down as a tradition. But Jesus Christ is the Son of God. He’s real, and He lives.
Now, here’s a question, the last one, which is a very…
Now look. You might disagree with me at that. But if you do disagree with me, remember, let it be friendly, will you? I love you, and I don’t want to–don’t want to hurt you. I’m just–I’m wanting to be honest. If I can’t–if I tell my boy a lie, then I’m a liar. See? I want to tell him the truth.
Now, I tell him about Santa Claus; I say, “Yeah, sure, there’s Santa Claus. Watch daddy on Christmas night.” See? Yeah.
You know, the other day I was down there, and I tried that on a little girl just to see. I sure got paid back day before yesterday. I was in the building. And they was standing there, down here at the Quaker Maid. And I went down there to get the groceries. And so we, wife and I, was in there. And there was a little bitty girl, wasn’t over about eighteen months old, and she was standing there going–singing, “Dingle Bells, Dingle Bells…”
And I said… In her little stand, you know, setting in the back of the little cart. I said, “Are you looking for Santa Claus?”
She said, “That’s my daddy, mister.”
I said, “Bless your little heart, honey. You got wisdom.” 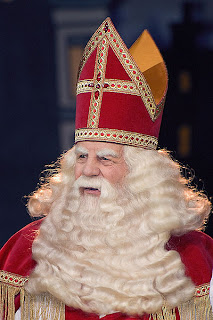 Known as ‘Sinterklaas‘ in Dutch folklore

‘God’s Wrapped Gift‘ (60-1225)
“(Santa Claus) is a figure with legendary,
mythical, historical and folkloric aspects…”
(wikipedia.org)
Give your children the gift of Truth this Christmas,
Bro. Nathan

2 responses to “Diary Of A Message Dad (Is Santa Claus Real?)”