On October 12th, 2009 Pastor Youcef Nadarkhani of Rasht, Iran was taken into custody for charges of apostasy (“renouncing Islam“). He has constantly been under the threat of execution since that time. He has repeatedly been offered freedom if he will but recant his faith in Jesus Christ, but he replies,”I cannot”. 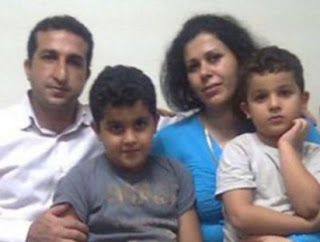 February 9th, 2010 – Voice Of God Recordings began covering the story of the imprisonment of ten believers in Iran on their blog (more reports with greater detail about Brother Youcef followed as they received further information).

In October of 2010 the USCIRF (U.S. Commission on International Religious Freedom) “(urged) the Obama Administration to Demand Release of Pastor Facing Execution in Iran for Apostasy“.

January 11th, 2011 – Voice Of God Recordings reported that Congresswoman Giffords (who had recently been shot in Tucson, AZ) had “embraced the efforts to help free Brother Youcef Nadarkhani and Brother Behrouz Sadegh-Khandjani in Iran. She brought the case before the United States Department of State, where they began efforts to halt the extreme persecution of these believers (when the situation with the believers in Iran came to her attention).”

“We are particularly concerned by reports that Christian pastor Youcef Nadarkhani is facing execution on charges of apostasy for refusing to recant his faith.”

In thinking of Bro. Youcef I am reminded of the words Martin Luther spoke on April 18th, 1521, “Unless I am convinced by proofs from Scriptures or by plain and clear reasons and arguments, I can and will not retract, for it is neither safe nor wise to do anything against conscience. Here I stand. I can do no other. God help me. Amen!“

Please continue to remember Bro. Youcef and his family in your prayers. I know that God is more than able to deliver him, and restore him to his family. I pray that the leadership in our nation will be instrumental in quickly restoring his freedom.

“If it be so, our God whom we serve is able to deliver us from the burning fiery furnace, and he will deliver us out of thine hand, O king.
But if not, be it known unto thee, O king, that we will not serve thy gods, nor worship the golden image which thou hast set up.” (Daniel 3:17-18)

“And when he came to the den, he cried with a lamentable voice unto Daniel: and the king spake and said to Daniel, O Daniel, servant of the living God, is thy God, whom thou servest continually, able to deliver thee from the lions?
Then said Daniel unto the king, O king, live for ever.
My God hath sent his angel, and hath shut the lions’ mouths, that they have not hurt me: forasmuch as before him innocency was found in me; and also before thee, O king, have I done no hurt.” (Daniel 6:20-22)